Between Terminals A-East and B
Ticketed Passengers

This franchise-changing victory was 57 years in the making. The previous time that the Eagles won an NFL Championship was December 26, 1960, at Philadelphia’s Franklin Field when the Eagles defeated the Green Bay Packers, 17-13. The 1960 title came 11 years after the Eagles strung together back-to-back championships in 1948 (7-0 triumph over the Chicago Cardinals at Philadelphia’s Shibe Park) and 1949 (14-0 victory over the Los Angeles Rams at the L.A. Memorial Coliseum).

At the time of the 1960 NFL Championship quest, there was no Super Bowl, no Lombardi Trophy, and no grand parade. In the years that followed, the NFL made changes. In 1967, the first Super Bowl was played and in 1971, the first Lombardi Trophy was awarded. For decades, the Eagles and Philadelphians remained on the sidelines watching others take home the World Champion title and coveted trophy.

Finally, a breakthrough came in 1980 when the Eagles upended their arch-rival, the Dallas Cowboys, 20-7, at Veterans Stadium to win the NFC Championship and earn their first Super Bowl appearance versus the Oakland Raiders. To Philadelphia’s great disappointment, the final score was Raiders 27 – Eagles 10 in Super Bowl XV.

Not until the 2004 season were the Eagles able to get back to their second Super Bowl. They won the NFC Championship on January 23, 2005, by defeating the Atlanta Falcons, 27–10, at Lincoln Financial Field. The Eagles faced the New England Patriots in Super Bowl XXXIX and lost in a close game, 24-21.

Thirteen years later, 2017 turned out to be a magical season for the Super Bowl-starved, hungry underdog Eagles. With 13 wins, tying a franchise record (2004) for wins in the regular season, the Eagles clinched the NFC East Division and entered the NFC playoffs with home-field advantage. The Eagles beat the Atlanta Falcons, 15-10, in the Divisional Playoff Round and then trampled the Minnesota Vikings, 38-7, to win the NFC Championship Game and earn their third Super Bowl appearance.

The Eagles, City of Philadelphia, and Eagles fans around the world were a Midnight Green nation for the two weeks leading to Super Bowl LII. The anticipation and excitement were palpable. “Underdog mania” swept over the City. On Super Bowl Sunday, February 4, 2018, the Eagles faced the 5-time Super Bowl Champion New England Patriots. The game has been described as one of the best Super Bowls ever. And it was! The Eagles won Super Bowl LII, defeating the Patriots, 41-33.

Newspaper headlines read, “AT LAST! EAGLES FINALLY WIN THE SUPER BOWL” and “WON FOR THE AGES!” The Eagles, the city, and the fans are forever World Champions. 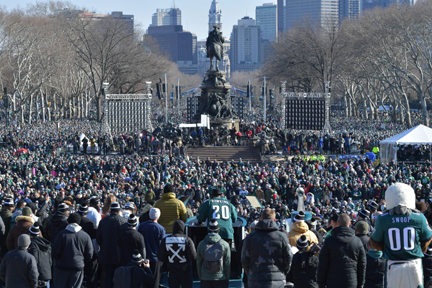 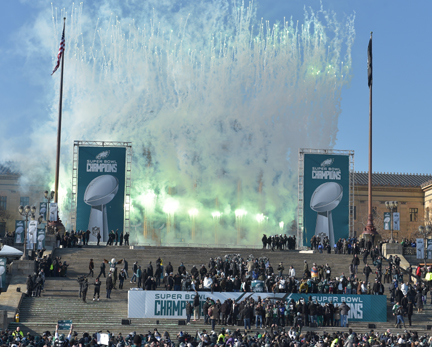