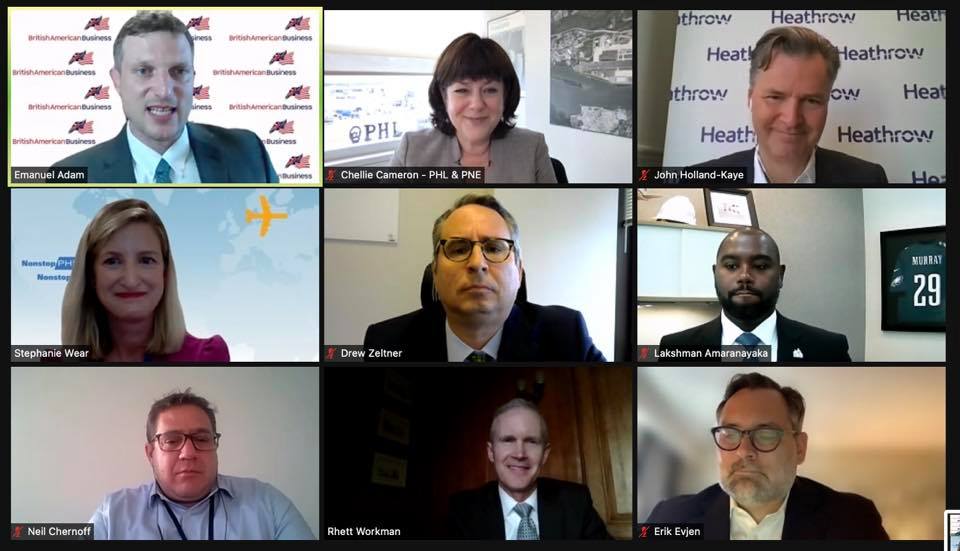 The September 20th announcement that, beginning in November, the United States will ease restrictions that have prevented citizens from 33 countries since March 2020, was especially welcomed by Philadelphia International Airport (PHL). During the British American Business Council of Greater Philadelphia (BABCPHL) webinar, “On the Fly Travel Update: PHL/LHR & The World”, PHL CEO Chellie Cameron, London Heathrow (LHR) CEO John Holland-Kaye, and a panel of representatives from the travel, airline, and legal sectors, discussed what the easing of the restrictions means to the Greater Philadelphia region and London, and what work is still needed to fully restore travel.

“At PHL, our passenger volume is still down about 30 percent from 2019,” said Cameron. “The biggest reason for that is we haven’t been able to handle transatlantic service like we did pre-COVID. We also lost a lot of our domestic capacity because there were no connecting passengers flying onto the UK or Europe.”

Cameron noted that London Heathrow is by far the largest transatlantic market from PHL. In 2019, American Airlines and British Airways carried more than 462,500 passengers on over 2,200 nonstop PHL-LHR flights.

“Each PHL-LHR daily roundtrip service has an economic impact of $140 million and 812 jobs,” she added.

In May, PHL and LHR signed a Memorandum of Understanding (MOU), committing both airports to working closer together to support the recovery from COVID-19. The MOU represents a framework by which the airports can help the LHR-PHL route and United States-United Kingdom connectivity recover. The two airports also engaged their counterparts at American Airlines and British Airways to increase airline to airport coordination.

“It may seem odd to have something like that [the MOU] in place between two distant airports, but I always look at these things through the passengers’ eyes,” said Holland-Kaye. “For a passenger, your journey starts at your home and ends up at your ultimate destination and you expect to have a seamless journey through both airports and on the plane. It is absolutely natural that we should all work together to make sure that that journey seamless and we give passengers the very best service they can get.”

During the hour-long session, participants spoke of the negative global economic impact of COVID-19 travel restrictions, the loss of connectivity between friends and relatives and airlines’ and airports’ renewed emphasis on cargo during the pandemic.

“Between March and December of last year, we flew over 5,000 cargo missions at American with the 5,000th mission passing through Heathrow on Christmas Eve,” said Workman. “That trend continues. Year to date, we’ve flown the equivalent of 3,000 big red London buses across the Atlantic in the cargo compartments of our aircraft.”

Details of the easing of travel restrictions have not been finalized. While the developments in Washington two days before the webinar made participants more optimistic about international travel recovery, they acknowledged the recovery will not be immediate. Testing requirements, vaccinations and the public’s comfort with getting on planes—in many cases for the first time in almost two years—are among issues that will pose a challenge. Zeltner also spoke of delays of obtaining visas due to decreased staffing at U.S. embassies.

“The law is just beginning to catch up with the enthusiasm,” he said. “I think the advocacy still has to continue. We have to make sure the Department of State ramps up and has the ability to process folks in a more normal fashion again. But clearly, having those bans lifted and having folks being able to travel for business trips or tourism from all of these regions is just moving the ball forward in an incredibly important way.”