THE SCENARIO: An American Airlines Airbus 321 jetliner with 131 souls on board is preparing to land on Runway 9R during a fast-moving thunderstorm at Philadelphia International Airport (PHL) when the flight encounters severe wind shear. The crew begins to abort the landing and do a go-around, but a microburst forces the aircraft down onto the runway, breaking it apart and engulfing it in flames. There are numerous casualties.

The above scenario was played out on Saturday, October 24, during PHL’s Emergency Preparedness Exercise (EPEX), the official full-scale emergency exercise that FAA requires all certified airports to conduct at least once every three years. While the 2020 EPEX drill was carefully staged, the exercise gave the airport an opportunity to test and evaluate its response to a real-life incident. 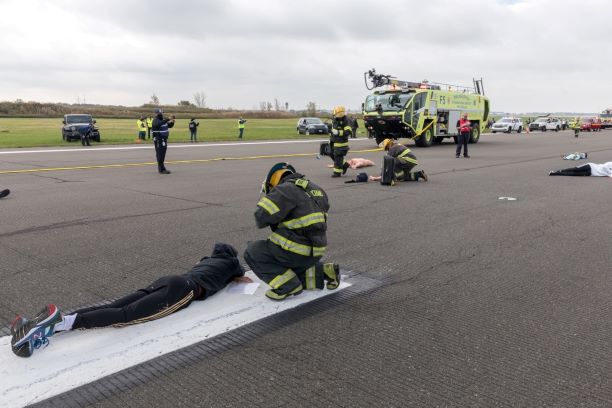 “We carefully plan these exercises all the while hoping we never need to implement them in a real-life situation,” said Airport CEO Chellie Cameron. “Responding to a major incident is a massive operation that requires close coordination among numerous responders and agencies. EPEX gives us the opportunity to practice a simulated incident to make sure we are prepared and that our plan works.”

Official observers from the City, state and federal agencies had the opportunity to view the drill. A group of official evaluators consisting of aviation and first responder professionals walked through the incident site to assess the procedures of responding emergency units.

The drill itself and the corresponding assessments from aviation professionals enable the airport to determine the effectiveness of its emergency response procedures and implement changes or enhancements if necessary.

“It’s important to test emergency response plans to ensure they work and most importantly, find out what doesn’t work so changes can be made to the plans,” noted PHL COO Keith Brune. “In addition, testing your communications systems and plans is critical to ensure they work when needed. Also, knowing the various agencies and the command personnel who will respond to an airport emergency will help ensure a more coordinated effort. In addition, this prepares the PFD, PPD, OEM and other city agencies in exercising their own mass casualty plans and procedures for the entire city.  So, our drill helps them be better prepared for a city-wide disaster.”

Like just about everything else in 2020, the airport’s EPEX exercise this time was done amidst challenging circumstances. PHL and its emergency services partners had to plan a viable exercise that satisfied the FAA while adhering to COVID-19 guidelines as well as respecting budget constraints being experienced by both the airport and outside agencies.

The airport worked with the FAA to get a three-month extension on the deadline, and due to time constraints, the exercise scenario was the same as in 2017. The FAA granted permission to use a minimum of 35 “victim” volunteers as opposed to the usual 100-plus in order to better allow for social distancing and minimize the number of participants in compliance with City guidelines. The victim volunteers cycled through the scenario twice to give all assigned medics and first responders the opportunity to take part in triage and treatment. Everyone was provided with proper Personal Protective Equipment.

Planning among the airport and partner agencies was done virtually, and objectives were scaled to what was absolutely necessary.

“I want to commend our entire PHL team – especially John Glass and our Operations, Security and Facilities units -- all the participating agencies and the FAA for coming together to make EPEX 2020 a successful exercise under extraordinary challenges,” Cameron said. “This was truly a collaborative endeavor, and everyone who took part in any way deserves a lot of credit.”

The airport wishes to thank the following for their participation in the EPEX exercise: