Skip to main navigation
Maintaining an Airport During a Pandemic

Back in March as the COVID-19 pandemic was rapidly spreading along with government-mandated shutdowns and restrictions that, among other things, turned airports into virtual ghost towns, Allan Moore recalls the strange sense of walking through Philadelphia International Airport’s deserted complex.

“It was very eerie,” remembers PHL’s Deputy Director of Facilities Maintenance. “How few vehicles were on the road, how few guests we had in the building. It was almost surreal for a facility this large to be almost empty.”

Despite the 90 percent plummet in passenger traffic and airline operations during the better part of the past three months, there was still the 3.3 million square feet of PHL’s footprint that had to be maintained in order for the airport to stay open and operational. Much of that responsibility falls to Moore’s Facilities Maintenance department, which accounts for more than half of the City of Philadelphia Division of Aviation’s 1,000 employees and whose members are spread across 8 units. 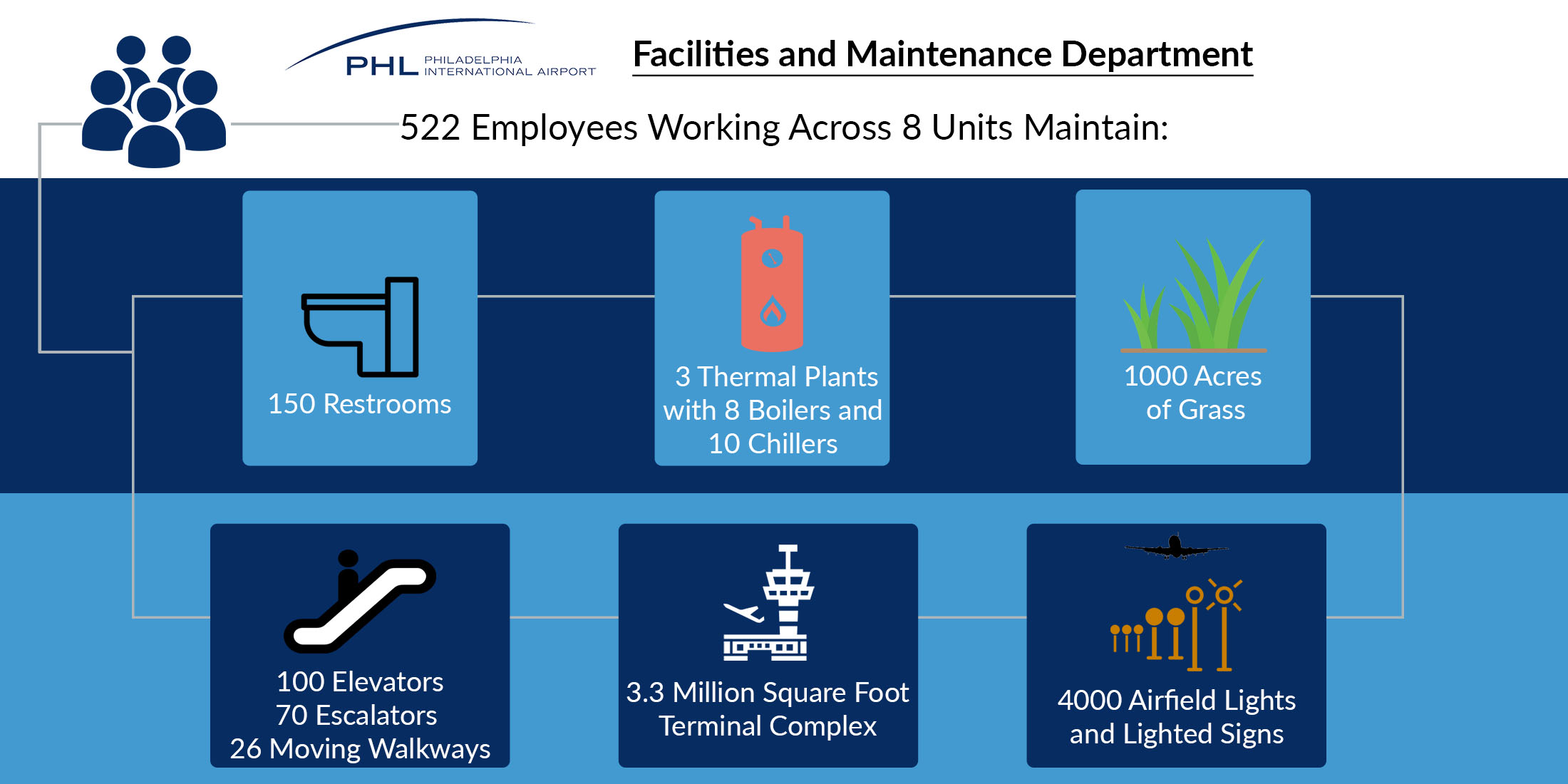 “Despite what the traffic level is in this airport, it is still 3.3 million square feet,” Moore noted. “The airport is a very land and building intensive facility. It needs to be maintained and it needs to operate. The lights still have to be on and work, the air conditioning has to be on, and it has to work, all those 500 air handlers all that stuff has to run, and it has to be maintained. Maybe the restrooms don’t need to be cleaned as frequently, but they still need to be cleaned. Maybe the trash doesn’t need to be emptied as it used to be, but it still needs to be cleared. Same thing with the airfield. The runway lights, the taxiway lights, they still have to be inspected and maintained regardless of how many planes land. The grass still grows, and it has to be cut on roughly 1,000 acres no matter how many planes land.”

The environment of the past three months has been difficult for everyone in a variety of ways. The workplace as most of us knew it has been changed and presented challenges, especially for those whose jobs can’t be done from virtual offices at home. The vast majority of the Facilities Maintenance team falls into this category.

“The biggest challenge is staffing – trying to keep up with all that work with a reduced staffing level because we’re trying to implement social distancing,” Moore said. “For a large part, the shops, administration, P&G, and CSS have been operating on a rotating schedule. You have different folks coming on different days, some are running A and B teams, you try keeping people spread out. What that means is we’re effectively operating at half-staff and we’re already short-staffed. Some people can work from home but an electrician, a building maintenance mechanic cannot work from home. A lot of work has been deferred to the extent that we can. A lot of what we are doing is responding to calls and not doing much true preventive maintenance. We are responding to service calls and making repairs. You can get away with that for a little bit of time but not for long. Especially now that summer is almost here with all the HVAC. It’s one thing to fix air handlers and make sure if you’re hot in your office that we get the cold air flowing; but we also have to do filter changes, we need to be priming traps on condensation drains. You can only push off the preventive maintenance so far.”

Meanwhile, in the face of aforementioned obstacles, the PHL Custodial team pressed on with additional deep cleaning, sanitizing and disinfecting efforts on top of its normal daily cleaning routine. The custodians had other challenges as well.

“We had a large unsheltered population occupying the bag claims from the end of March until such time as they could be relocated to areas with better services,” Moore noted. “Once they were gone, we had to get in there and do a deep cleaning. Since Memorial Day, having successfully worked with the City and outreach agencies to relocate the unsheltered population, that’s been tremendously helpful because now our custodial team can get back to their normal way of work without having to dedicate additional resources and overtime to cleaning up after the unsheltered population. I think it’s helpful for morale, too, that the City came through and said it was going to help find a solution and work with the homeless advocates and the police and they did. Not just the leadership here at PHL but downtown deserves a lot of credit for that.”

While the pandemic environment produced challenges, it also presented opportunities. With terminals practically empty due to the drastically reduced passenger traffic and the Employee Lot minimally occupied, the Facilities Maintenance team was able to tackle some projects without inconveniencing guests or employees while cutting back on costs during a budget-conscious period.

“With the reduced activity, we were able to shut down some equipment particularly elevators, escalators, and moving walkways in the A-West International terminal to save energy and to perform some maintenance and repair on some of that equipment,” Moore said. “We did the escalator at B-C ticketing up to C checkpoint while the checkpoint was closed. That was a good opportunity to perform some major repair on that escalator. We also replaced some of the security checkpoint doors. We were going to do that anyway, but we had the opportunity to do a lot of that work during the day because of the reduced traffic.

“We restriped a majority of the Bartram Avenue (Employee) Parking Lot while there aren’t a lot of cars in it. We had opened up garage parking to employees. The Lot was probably 80 percent empty so we took the opportunity to restripe it. Otherwise, you have to schedule that work, you have to try to block off spaces while there’s a lot of cars in there. It makes for a lot of coordination, and it’s a scheduling challenge to do.”

With the City of Philadelphia now in the less restrictive Yellow phase, more employees are in the process of returning to their physical workplaces. Moore is anticipating that staffing levels in his department will become more robust and more people will be working on their regularly scheduled shifts albeit with best practices and CDC guidelines in place.

“If we have to make adjustments, we will whether it’s in start times, how we assign work, where people are eating lunch, we’ll assess how it goes,” Moore said. “If you have 8 people who need to punch out, they can be in line to punch out; they just have to be six feet apart. You punch out and you move away. You just have to spread out in the shops, in the break rooms, out into the more common areas. It doesn’t mean you can’t all be there; you have to maintain your distance.

“All in all, I think we fared pretty well with the staff we have on site and kept everybody safe,” Moore reflected. “I think that’s a testament to the leadership – Custodial, Building Maintenance, CSS, P&G, Electrical and Electronics, HVAC, all of them. I think the individual department leads, the supervisors and managers have done a good job of implementing social distancing measures with their staff, keeping them separated when they punch in, when they give out assignments, trying to prioritize tasks, make repairs. I think we have been in pretty good shape. A lot of our employees want to come here, do a good job and go home knowing they were productive, and they contributed to helping PHL be its best.”