When people think of weather and air travel, usually the first images that pop up are of plows and other apparatus clearing snow off runways and deicing liquid bathing aircraft on airport deicing pads. While it is true that winter weather operations and the related travel disruptions that often accompany it are a big deal and attract a lot of attention in cold weather cities like Philadelphia, summer weather can be just as significant in terms of its impact on air travel. 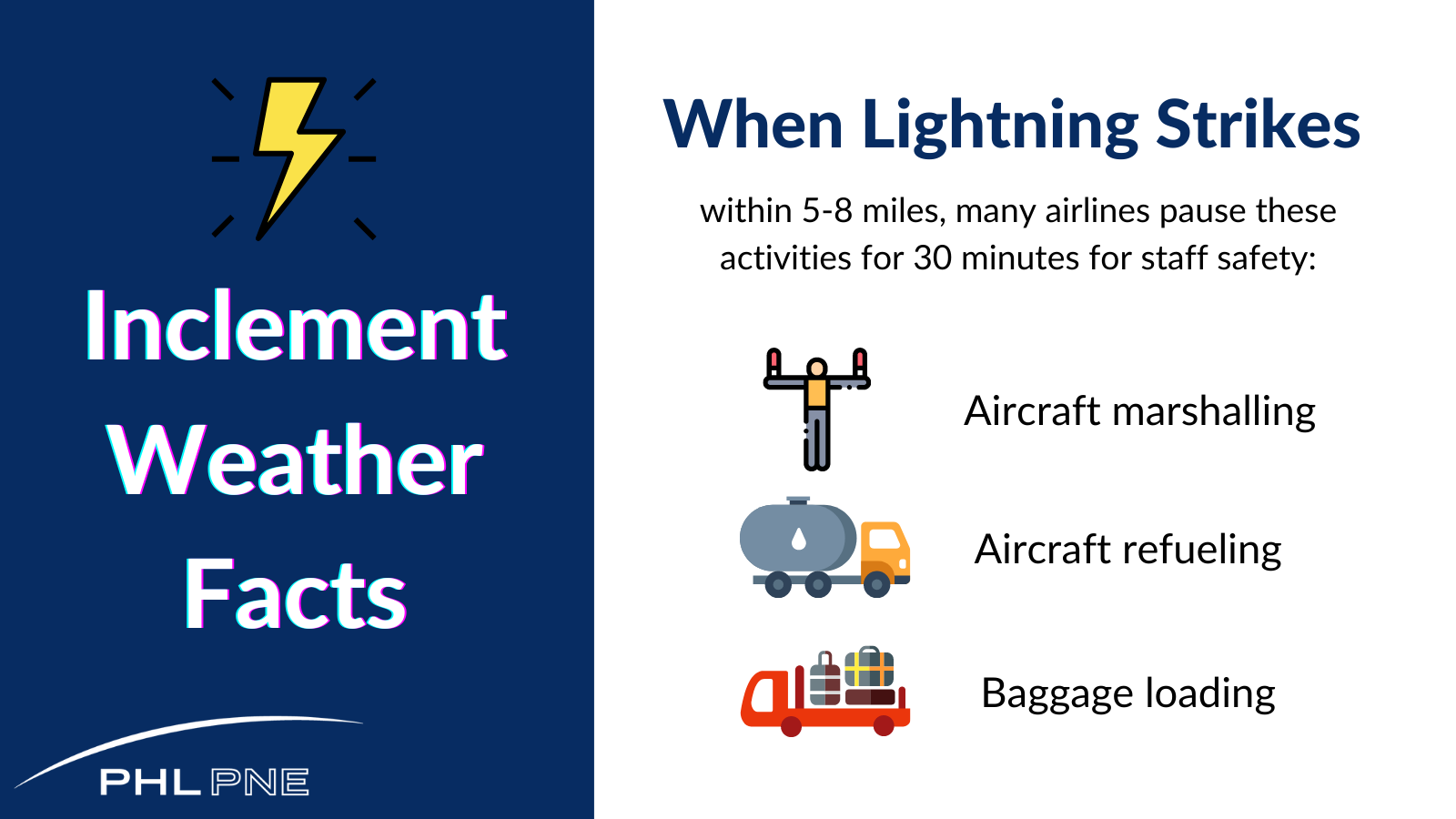 Summer weather – specifically the hot and humid variety that can produce thunderstorms with heavy downpours, lightning, and strong winds – can be disruptive to air travel whether it’s happening in Philadelphia, as it often does, or other cities. Just like snowstorms in winter, inclement weather in one city can have a domino effect on flight operations around the country. If thunderstorms in Philadelphia or elsewhere prompts the Federal Aviation Administration to implement a Ground Stop, which would hold flights bound for PHL or another airport on the ground at their point of departure, that could result in those flights arriving behind schedule as well as backing up departure times on outbound flights. Lightning in close proximity to the airport (usually five-eight miles) can bring fueling and handling operations, including baggage loading and unloading, to a halt. Operations will resume when it is safe for crews to return to the airfield (30 minutes after the last lightning strike).

Also, unlike most winter weather events that can be forecast days in advance giving airlines ample time to get ahead of the storm and rebook passengers and modify schedules, summer weather often does not allow for that leeway. Add to that mix the fact that PHL occupies the busiest airspace in the nation.

“Some of the biggest challenges are dealing with our own storm issues and getting diversions from other major airports around us like JFK, Newark, and (Washington) Dulles,” noted Steve Belton, Airport Operations Supervisor. “Being in the middle of two different major airspace congestion areas, New York City and Washington, DC, we tend to receive lots of domestic diversions and some international ones. They will also receive diversions from PHL when we are sacked in with storms.  Most of the airlines based at PHL have operations in the surrounding airports, so they tend to divert to PHL since they know they have ground crew and airlines representatives easily available. When our airline traffic is unable to depart, and we are receiving arrival from other airports, the airfield and gate parking space can become hectic.”

Belton and his ramp tower operations team prepare beforehand to move into action by planning how to handle diversions, both domestic and international, identifying parking locations for diverted aircraft and readying Passenger Transfer Vehicles, which can deplane passengers from aircraft that are not at a gate and transport them to a terminal, as well as mitigating potential airfield congestion. The team relies on coordination with other airport partners including the FAA, the airlines and, in the case of an international flight that may need to stay at PHL and disembark passengers, U.S. Customs and Border Protection.

“The ramp tower staff try and organize and prioritize the needs of any airline that needs help,” Belton said. “We contact other airlines for gate space, coordinate with ramp control and the FAA Tower trying to make pathways. When aircraft divert to PHL, my staff is notified by the airline or more likely by our program, Symphony OpsVue. OpsVue has pops up alerts when aircraft change their destination to PHL. The program gives us most of the information needed: passengers counts, and if the plane is either a ‘Stop N Go’ or passengers are unloading. For that information, we call the airline, either based at PHL or the airlines operations phone number at another airport. Once we have the information we need, we spread that information to appropriate stakeholders like CBP, a PHL based airlines or ground handlers willing to handle the flight. The airport becomes very collaborative and try to help each other as much as possible. It is in everyone’s best interest.”