A Message from the CEO 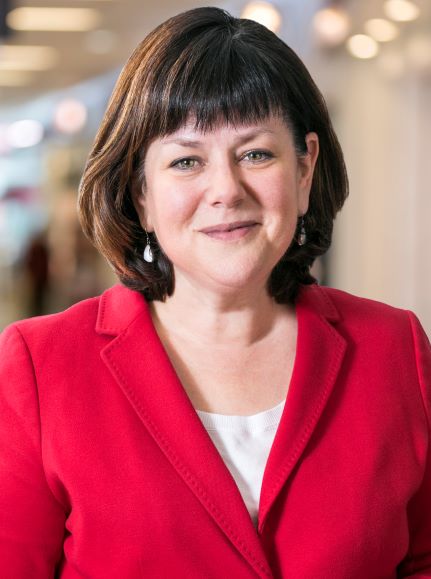 The City of Philadelphia’s Division of Aviation entered 2020 on a high, having set a record for passenger volume in 2019. We could not have imagined the chaos that would begin just a few months later.

Despite the challenges 2020 presented, our team kept Philadelphia International and Northeast Philadelphia Airports open and operational. We adapted to many new health and safety protocols and collaborated on innovative solutions to problems posed by a relentless global pandemic all while maintaining a safe and welcoming environment for our guests, colleagues and stakeholders.

As you watch our year in review video and peruse our news articles, you will learn of the activities and events that gave us hope and inspired us to keep moving even during the darkest days of 2020. The strength and commitment of the Division of Aviation staff is awesome.

Our industry has been forever changed by the COVID-19 pandemic and national and international events of 2020. With the fundamental changes and adjustments the Division of Aviation is making, we will be ready when the world reopens for travel.

Thank you for your continued support of PHL and PNE.  Stay safe!

For more PHL and PNE news, visit the online newsroom.

Since 2019, MarketPlace PHL and PHL Food & Shops have partnered with Philabundance on a program that rescues food from more than 65 merchants at the airport for redistribution to various agencies and neighborhoods in the Greater Philadelphia region. The program was recognized by Philadelphia Business Journal  as one of the publication’s “2020 Faces of Philanthropy”. Thanks to the hard work of PHL Food & Shops staff and merchants, over 30,000 pounds of rescued food (about 30,000 meals)have nourished PHL’s neighbors in need across the Delaware Valley.

In May, the PHL Ramp Tower was lit blue in support of healthcare workers facing the COVID-19 pandemic. With this new feature, the airport's Ramp Tower (located between Terminals A and B) joined other local buildings and landmarks in illuminating the region in blue in appreciation of the healthcare community. Throughout the year, the Tower lights will reflect the colors of Philadelphia’s sports teams, as well as hues associated with holidays, special city and airport events and causes, including Valentine’s Day, LGBTQ Pride, July 4th and Breast Cancer Awareness Month.

On May 6, PHL and 22 airports across North America came together for the JetStream Music Festival, an online celebration of local music hosted by Austin-Bergstrom International Airport. The free, multi-hour livestream concert took place on Facebook Live. Each airport featured a musician local to their city in support of the creative community during the COVID-19 crisis. Philadelphia Music Ambassador Chill Moody, a frequent performer on the airport's B/C Connector stage, represented PHL. 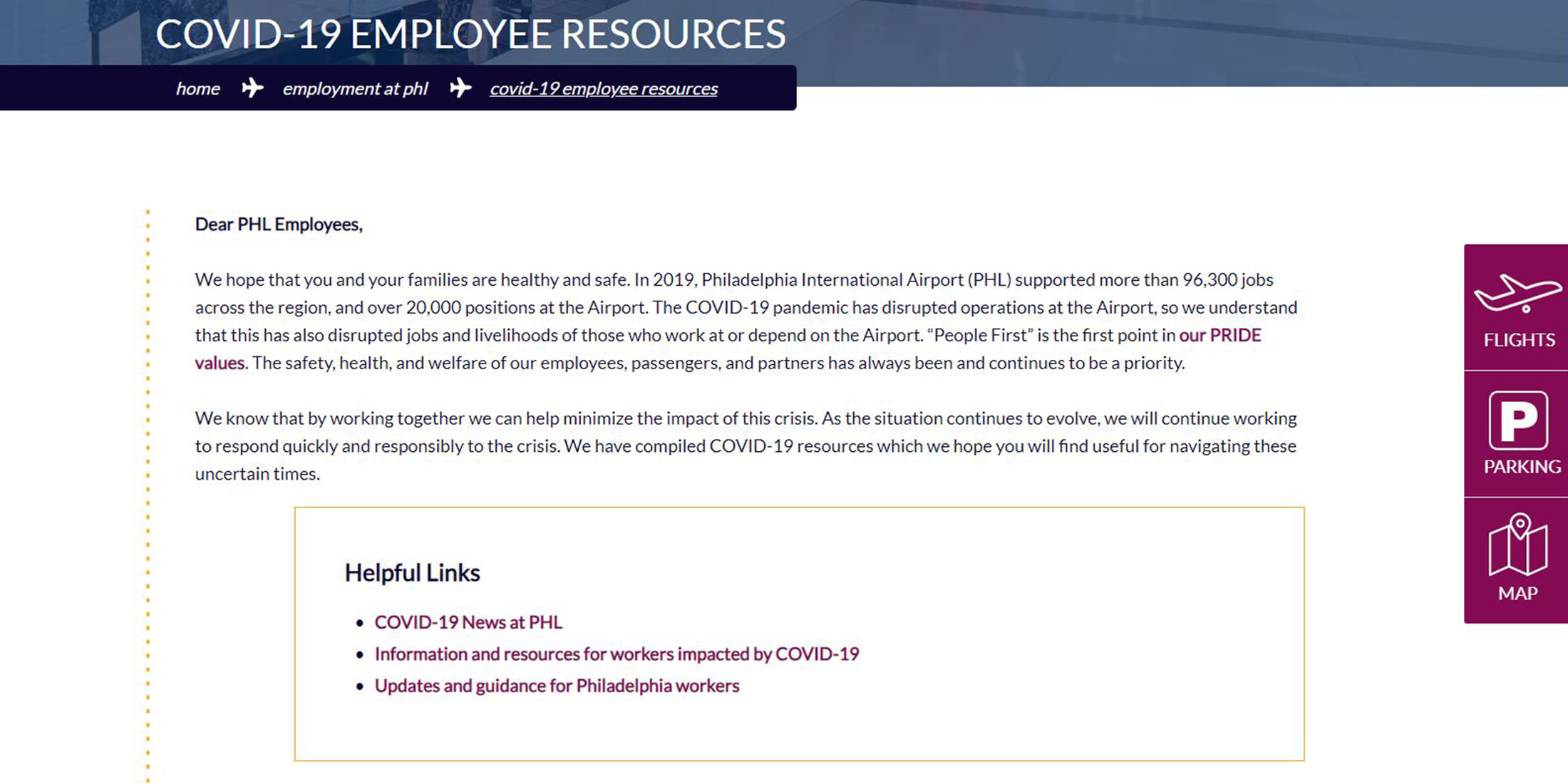 In May, the airport launched a COVID-19 Employee Resources page where workers can access information on entering the displaced worker program, applying for unemployment benefits, and obtaining current job openings throughout the city. Workers can also access information regarding mortgage, rent, utility, phone, internet, food, transportation, and credit card payments.

The City of Philadelphia’s Division of Aviation observed two anniversaries during the last days of June: PHL’s 80th on June 20 and Northeast Philadelphia Airport’s (PNE) 75th on June 26.

Philadelphia’s official ties to flight date back 95 years to 1925, when the City provided 125 acres of land in the Eastwick neighborhood (now part of PHL’s northeast corner) for Pennsylvania National Guard training aviators.

In July, PNE received a $9.1 million Airport Improvement Program (AIP) grant from the FAA to rehabilitate Runway 6-24, which is PNE's primary runway and accounts for approximately 60 percent of the airport’s traffic. This is the largest FAA AIP grant PNE has ever received.

Airport Partners Work Together to #MaskUpPHL:

In September, PHL received an $18 million Airport Improvement Program (AIP) grant from the Federal Aviation Administration (FAA) for vital airfield infrastructure projects, including the reconstruction of Taxiway K, the rehabilitation of Runway 17-35 and the improvements to runway lighting.

PHL has been actively rehabilitating its East Airfield since spring 2019, restoring various pavement areas on the east side of the airport to improve the serviceability of the pavement and eliminate structural deficiencies. Work areas included the South Apron and Taxiway D South, Taxiway D at Runway 8-26, North Apron and Taxiway D North, Taxiway F/K intersection, Taxiway B and Taxiway E2, Taxiway K at Runway 17-35, and Taxiway E/K intersection. Like other PHL Capital Development projects, construction was halted in mid-March in compliance with Governor Wolf’s order to cease all non-life sustaining activities due to COVID-19. Work resumed as soon as it was deemed safe and the project was recently completed on schedule in September.

While securing a larger share of East Coast air cargo activity has been part of PHL’s masterplan for several years, and portions of the West Cargo Redevelopment & Expansion Plan are underway, the COVID-19 crisis created an urgency for PHL to grow cargo operations now. In October, the airport convened the first meeting of the Philadelphia Air Cargo Council to introduce PHL's current cargo capabilities and discuss its expansion plans.

Every three years, the FAA requires all certified airports to conduct a full-scale Emergency Preparedness Exercise (EPEX). Despite challenges created by COVID-19, PHL was able to hold a successful drill in October.

PHL’s online map does more than help guests navigate their way through the terminals to their gates. The recently updated tool now highlights the location of touchless health amenities throughout the airport, including hand sanitizing stations and water bottle refilling stations.

Prepare for Takeoff from PHL with Food Delivered AtYourGate:

In October, PHL Food & Shops became the first airport program in the U.S. to launch an integrated meal delivery service for passengers using the OrderatPHL food ordering platform and AtYourGate delivery service. Passengers can now order a variety of items, including local favorites like cheesesteaks and crab fries, from a mobile device and have their food delivered to their location at PHL.

In October, PHL hosted its Business Opportunity Forum (BOF), the airport's signature yearly event that gives representatives of large, small, minority-owned, and disadvantaged business enterprises and organizations the opportunity to learn about the state of the airport and future contracting opportunities, and to network with peers, resource partners, and airport leaders. More than 500 people attended this year's virtual BOF.

As part of its continuous commitment to enhancing the guest experience, PHL has been modernizing its 48 sets of passenger-facing restrooms since 2012. Goals of the renovation program include improving quality and comfort, accommodating more travelers and implementing sustainability measures. In October, updated restrooms near Gate F31, Terminal D Bag Claim and Terminal D Ticketing reopened.

Jefferson Health, Ambulnz and PHL formed a partnership to launch a COVID-19 testing program at the airport. The testing facility, located in Terminal E Departures building, provides passengers with the confidence they need to travel safely and conscientiously between destinations. The facility opened its doors December 4. The availability of COVID-19 testing will enable PHL to expand connections with destinations requiring testing prior to arrival.

Since its beginning in 1998, PHL’s Airport Art Program has created a unique Philadelphia experience for guests and provided regional artists with the opportunity to showcase their work to the millions of travelers that pass through the airport’s terminals every year. The program’s success put it in the spotlight as part of the recently-published Airport Cooperative Research Program (ACRP) synthesis “Visual Arts Programs in Airports”,  a research paper that explores the benefits of airport arts programs by examining the offerings at 13 U.S. facilities.

Innovating together toward a sustainable, resilient future

Throughout the pandemic, PHL continued to prioritize sustainability and found creative ways to do so via partnerships, alternative funding sources, and greater attention on integrating sustainability upstream where possible. In fact, many of the stories above are direct evidence of this! The last 12 month’s events – the pandemic, the increased attention on long-standing racial inequity, and the prominence of the debate about climate change – strongly highlighted the connection between human health and social requirements, the environment, and the economy. We recognize that these three dimensions of sustainability - society, environment and economy - are interrelated. With this in mind, the DOA decided to prioritize its ongoing efforts to address sustainability and climate change and initiated the Sustainability and Climate Adaptation and Resilience Plans. These efforts will support our organization in addressing social and environmental challenges strategically as we work to recover economically, carry out our mission, and achieve our vision as airports. Collaboration is key to our Sustainability and Climate Adaptation and Resilience Plans, like The Impact of Climate Change on Philadelphia International Airport – so throughout the first phase of these studies we held several workshops and coordinated with our partners to align efforts. This engagement will continue in Phase 2 and beyond to make sure the plans are implementable, supported, and add value.